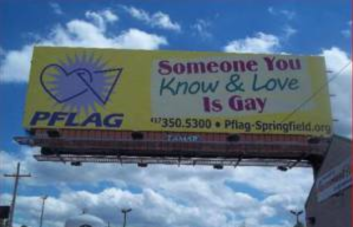 for a successful billboard campaign, which continues to promote positive change in the Ozarks community.

The billboard campaign began as advocacy effort, which gained traction in the summer of 2012 when Springfield City Council’s effort to amend the city’s anti-discrimination ordinance to include protections for LGBT citizens was defeated. Although adoption of the amendment was imminent––and would have made Springfield the 14th Missouri city to provide protections––the council backed down in the face of intense opposition, mostly from conservative religious groups.

As a result, PFLAG Springfield initiated a multi-pronged education campaign to inform, educate, and advocate. The billboards have become an effective centerpiece of PFLAG Springfield’s mission and accomplishes three goals:

PFLAG Springfield knows the billboards are successful from the feedback received through phone calls of individuals reacting to the billboards:

In 2013, PFLAG Springfield won the Chapter Advocacy Award from PFLAG National for our Billboard Campaigns.

In 2017, the Chapter Advocacy Award was inducted into the Ozarks Gay and Lesbian Archive.

Later in 2017, PFLAG Springfield revamped the original Someone You Know and Love is Gay billboard message with an updated look as well as added a new message, Someone You Know and Love is Transgender. These messages are currently cycling on a digital billboard in the Galleria shopping center, located at 1550 E Battlefield Road. This is a very visible location, right across from Springfield’s Battlefield Mall and other shopping and a high traffic intersection.

See you at the next PFLAG Meeting!